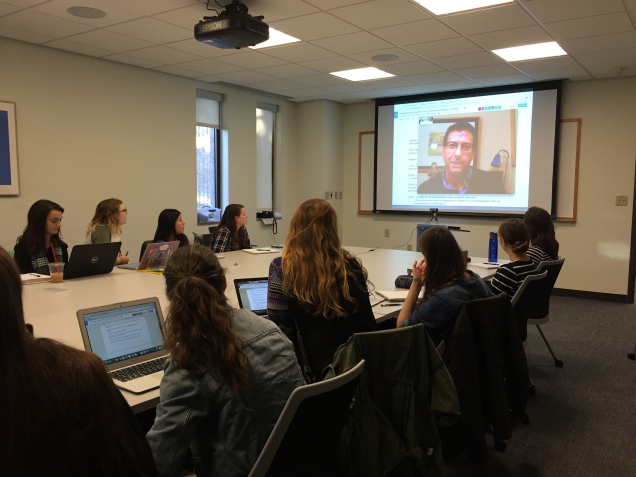 Among the different things related with technology that I have implemented in my classes in the last years, interviews that students in my SPA 250, Spain: A journey through history and culture conducted via Skype with people in Spain has been one of the most successful and popular.

The original idea was to interview three different people in Spain. I hoped to connect with someone related with Spanish politics, with a person in higher education, and somebody connected with social movements in Spain. The goal was to provide my students with a first hand glimpse of the most important issues in contemporary Spain.

“The interviews with the people in Spain were the most stimulating because they gave us an opportunity to connect face to face with the country we are studying.” – student evaluation

I was able to secure the participation of Jose Luis Blanco Moreno, socialist mayor of my native town. A few weeks later we chatted with Carlos Martinez Soria, the equivalent to the Dean of the College at the University of Castilla-La Mancha in Cuenca. Unfortunately, even though I was in touch with one of the leaders of a feminist organization, scheduling problems prevented a meeting with her. Our class met Wednesdays and Fridays 2:45-4:00, which unfortunately meant the interviews took place at 9:00 PM in Spain.

In order to maximize the outcomes of the activity, I created a Google Doc in which each student added a question that we would ask later. Before each interview we spent time reviewing the questions, correcting them for grammar, and assigning students questions to ask. In both cases this worked very well and we were able to keep the conversation to about one hour.

I was a little bit worried about the possibility of technical issues, but in both cases the connections worked very well. I borrowed a web conferencing kit from Mike Dreimiller in the DSCC in order to improve the audio and video quality. My students, our guests, and I were very pleased with the activity. My class was held in the new Dilley Room, which is well suited for this type of activity.

“… the Skype interviews with Spanish leaders really helped with my comprehension and listening skills in a language other than my own.” – student evaluation

Based on the positive response of my students, I intend to expand this activity next semester by having up to 4 guest speakers in my class. I can’t wait to see my students using their language and cultural skills with “real” people, because, as one them mentioned in the evaluations, “Connecting with outside sources in Spain challenge students to utilize Spanish as well as seek distinct perspectives from the country in comparison to the U.S.”

2 thoughts on “Learning Language and Culture through Interviews”